Last week, my novel went from selling a few copies a day to becoming an Amazon number 1 bestseller for Time Travel in the UK, Canada and Australia by using a BookBub Featured Deal. I hope some independent authors might find it interesting to hear how this happened.

I suspect many writers know about BookBub, but if not then basically it’s the world’s largest book promotion site. Readers subscribe for free, and every day, BookBub send millions of subscribers an email with links to discounted ebooks. As an author, you pay to feature in these daily promotion emails. David Gaughran describes it a lot better than me!

The challenge as an author is that it is extremely competitive to get your book featured on BookBub. BookBub state that “only about 10%-20% of [applications] will be chosen as a Featured Deal.” It’s certainly not just for independent authors; many (most?) of the books on the emails are from traditional publishers.

And it ain’t cheap. As a writer you will pay a minimum of $100 for the least competitive, smallest category, up to $4000+ for something like Crime Fiction. The payoff, however, is that the average volumes you can expect to sell from such promotions are very high. But remember, your book has to be discounted/free.

The other point worth noting is that you can apply to have your book promoted in All Regions (the most expensive option), just the USA (a little bit cheaper), or countries outside the US (the cheapest option).

I decided to hedge my bets and apply for the cheapest option for my novel. Remarkably, they accepted me and this is my story of what happened.

A Tiny Bit of History on My Novel

I published my time travel novel, The Other Times of Caroline Tangent in May 2021. Between then and my BookBub promotion, I sold about 2,500 copies (ebooks and paperbacks in total). My core advertising was (and still is) through Facebook Ads, which meant the “full price” ebook of £2.99/$2.99 was selling between 5 and 10 copies a day. When I occasionally reduced that to 99p/99c, those daily figures could double.

I sell the ebook on Amazon, and also through PublishDrive, which manages the other key platforms of Apple, Kobo, Google Play and B&N. I sell the paperback through a Clays/Gardners distribution contract. On Amazon, I have once or twice reached the top 4,000 of all-Kindle books in the UK, and the top 20/30 of the Time Travel category.

It’s perhaps also worth stating that my goal for this novel is not to make my millions (although, okay, yes of course I’d love to), but more importantly, to build a reader-base for any future novels I write.

I decided to discount the book to 99p/99c. And I decided to apply for one of BookBub’s “International” Featured Deals, which is all countries outside the US; primarily the UK, Canada, Australia and India. To be frank, I did this because it was the cheapest option and I was unsure if I would sell enough books to cover my costs. That cost me $167 (about £125), compared to All Regions which would be $761 (about £560). The latter cost was quite a lot to risk on something where I wasn’t sure if it would succeed.

Remember, also, that with KDP, you only get 35% royalty at the 99p/99c level, so to break even on the $167, I would need to sell about 350 copies through BookBub. That still seemed a lot to me even though BookBub’s material says the average Sci Fi book sells 410 discounted copies through them. But as that’s the average, it can of course be less.

I was delighted when I was accepted.

With hindsight, I wonder whether applying for the “International” region was one of the reasons I was accepted. After all, I’m not a bestselling author and I am self-published. I have no idea if that region is less competitive, but my guess is that the US/All Regions are possibly more in demand. I’m also very glad that I did wait to get a fair number of reviews before applying, and that the ebook is distrubuted on multiple platforms (i.e. not just Amazon). You can read BookBub’s Tips on what they look for in applications, and I think my groundwork probably helped. I also think (hope!) that my cover design by the incredible Sophie Burdess (who also designed The First Fifteen Lives of Harry August) helped.

So What Happened? How Much Did I Sell?

Let’s put it this way, I’m still in awe over what happened! 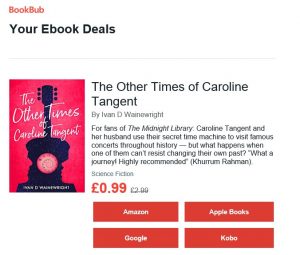 Firstly, I reduced the price of the ebook to 99p/99c four days ahead of the BookBub deal date. That’s because although my experience shows that Amazon usually changes the price within a few hours of me updating it on my KDP account, Amazon say it can take up to 72 hours and I wanted to be absolutely sure it was discounted in good time! This also meant that in the few days before the BookBub promotion was emailed out, my sales figures and Amazon ranking increased slightly. This might have helped Amazon’s algorithms, in the following days, see my increased sales as “genuine” and not a sudden spike.

On the day of the BookBub featured deal, they sent the email and, well, WOW!

On the day of the promotion, on Amazon alone I sold 234 copies, and on the following day a further 109. Through PublishDrive, the other platforms sold over 150. Even allowing for the fact that some of these sales might be organic, that is still around 500 copies in total. Way more than I ever dreamt I’d sell through this deal. You can see my sales chart here to show you the impact!

But even more astonishingly, my novel made number 1 on Amazon’s Time Travel category in the UK, Canada and Australia; and at one point, reached the top 200 all-Kindle books in the UK, and top 50 in Canada. That really made my day!! I never thought I’d get one of Amazon’s little orange badges. (Now I have, I kind of agree with author & podcaster, Mark Stay, who has suggested Amazon could send authors enamel bestseller badges through the post

I was also really happy to see sales not just in the UK (my core market), but also in Canada where readers bought it on Kindle and Kobo; Kobo was in fact by far my second highest platform for sales.

For the initial period after the BookBub featured deal, I was still amazed and delighted that my novel still sat at #1 in Amazon Canada Time Travel, and top 10 in the UK and Australia. And it remained in the UK’s top 1000 all-Kindle books for a several days. It also continued to sell on Kobo, and a few extra books on Apple, and I very rarely got sales on those platforms before the promotion.

For a few days after that, it continued to sell more than it was before the promotion, but definitely on a downward trend. And thereafter, it returned to the levels of pre-promotion sales volumes. I’m not overly surprised at that. I tried running a few Facebook Ads with “no. 1 bestseller” included in the ads, but that didn’t have much impact.

All that said, as you might imagine, I’m more than happy with the results, and there is a part of me that wishes I’d applied for the ‘All Regions’ featured deal to see what sort of volumes I might have sold! But that doesn’t matter; I know now what I might be able to achieve in the future.